You are here: Home / General / A BOOK FOR ALL MORTALS 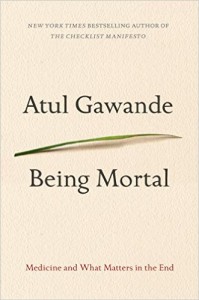 Physicians of the Victorian age had a saying, “The operation was a success, but the patient died.”

Incurable cancer had rapidly spread throughout Joseph Lazarus. One tumor was compressing his thoracic spine. His choices were comfort care and surgery.

More than seven hours of surgery brilliantly removed the pressure. But after 14 days in ICU, blood clots, respiratory failure, and systemic infections, the Lazarus family asked young intern Gawande to remove the ventilator. He did and listened to Lazarus’ “heart fade away.”

This is a book all caregivers should read. Written in a conversational style, it was not an easy read because it challenges and forces a look at a reality most of us would rather avoid: Our mortality.

Now surgeon (and author) Atul Gawande takes a provocative look at our entire elder care system in his book Being Mortal. Written in a conversational style, it is not an easy read because it challenges and forces a look at a reality most of us would rather avoid.

Gawande laments the medicalization of mortality. Medicine is extraordinarily successful in the treatment of curable disease, but fails to honestly address issues we all must eventually face.

In Lazarus’s case, Gawande and his colleagues easily explained the dangers of various treatment options, but failed to address the realities of Lazarus’s disease. The chances of Lazarus returning to anything like his life of just a few months earlier “were zero, but admitting this and helping him cope with it seemed beyond us.”

Gawande examines every level of the care system. Medical care suffers due to a lack of trained geriatricians (who have a totally different treatment orientation from other specialities). The problem? Money. Geriatricians make nowhere near as much as, say, surgeons. Further, geriatrics teaching programs are harder to fund than more glamorous programs.

The book criticizes many assisted living and skilled nursing facilities as marketing more to the adult children (bright, clean, smell-free) than alleviating the “Three Plagues of nursing home existence: boredom, loneliness, and helplessness.”

Harvard trained physician Bill Thomas passed up exciting offers to return home to upstate New York and become medical director of a local nursing center. Frustrated at the warehousing mentality (set times for awakening, bathing, food, recreation, bed) he took steps to enable residents to live to the best of their capabilities. Tremendous, measurable results ensued from as little as giving each resident privacy and autonomy (all to the extent possible).

After examining a number of other similar models, Gawande noted that proponents share a vision of what kind of autonomy matters most. Most people think of autonomy as being free of limitations and coercion. But another kind of autonomy – being the authors of our lives to the very end – is at the “very marrow of being human.” That later type can be addressed in various treatment settings.

Hospice could have been an available option for Lazarus. The terminally ill may have priorities other than extending their lives. Those may include minimizing suffering, strengthening relationships, being mentally aware, not being a burden, and having a sense that their life is complete. That is what hospice is about: Making every day the best day possible to focus on those priorities.

Lest anyone Be tempted to equate ideas of death with dignity with assisted suicide or euthanasia, Gawande bemoans the fact that in those places where assisted suicide is legal, particularly in Europe, in spite of “legal safeguards” the use of that option has increased dramatically as people choose the “fast lane” out. The problem is that this avoids the goals of a good life to the very end. The Dutch, for example, have devoted very little tp palliative care and hospice-type options – and why should they when “other options” are available?

Near the close of the book, Gawande tells of his daughter’s beloved piano teacher. Imbued with an indomitable spirit and love for her students, she had rapidly spreading cancer. She was given an aggressive treatment option that would extend her life by months (but with a debilitating physical toll) or hospice. She chose hospice and went home.

Gawande told his tearful daughter there would be no more lessons. A few days later the phone rang. It was the piano teacher. She did what she loved; she taught piano until four days before her death at home a few weeks later.

Being Mortal: Medicine and What Matters in the End
by Atul Gawande
Metropolitan, 282 pp., $26.00

Want to save a bunch of money? I’ll explain how here. But I’m warning you, … END_OF_DOCUMENT_TOKEN_TO_BE_REPLACED